Kornati islands are the most indented archipelago of the whole Mediterranean. They are situated in the North Dalmatia nearby Šibenik. This labyrinth of the sea and rocks consists of approximately 140 unpopulated islands, islets and cliffs with a surface of almost seventy square kilometers. In the close proximity of the National Park Kornati, containing a greater part of the archipelago with the surrounding sea, there is one more pearl of the protected nature in Croatia - it is the National Park Telašćica. The national park has the same name as the archipelago extending throughout a spacious and a deep bay on the neighbouring island of Dugi Otok. There are numerous beautiful little islets and next to the sea there is a small salt lake. Kornati is one of the most beloved destinations for boaters and navigation experts on the Adriatic sea, therefore it is no wonder there are about ten marinas nearby. 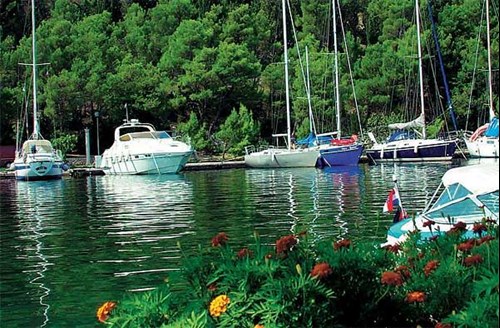 Skradin is a locality with a port on the right bank of the river Krka, about 16 km north of Šibenik. Upstream, not far from Skradin, there is a bridge over the river Krka with ACI Marina Skradin. Skradin is the central point of the National Park Krka being one of the oldest Croatian localities with the city status (since the 2nd century AD). 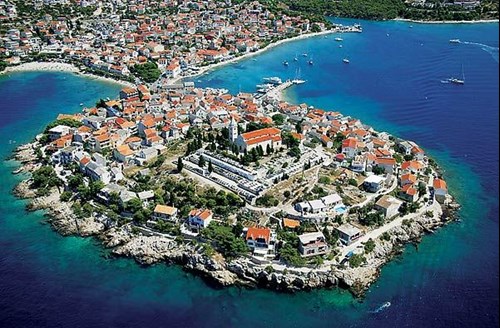 Primošten is one of the most famous tourist centres of Dalmatia (organized tourism has been developing since the Sixties of the 20th century). Simultaneously, it is one of the most pictoresque small localities on the Adnatic coast with a vanety of typical narrow streets on situated in the old part of the town, on the hilly little peninsula. On the other peninsula north of the town centre there are the Slava/Zora and Raduča hotels, whereas the Marina Lučica hotel lies in the southern part. The Kremik hotel is situated nearby. 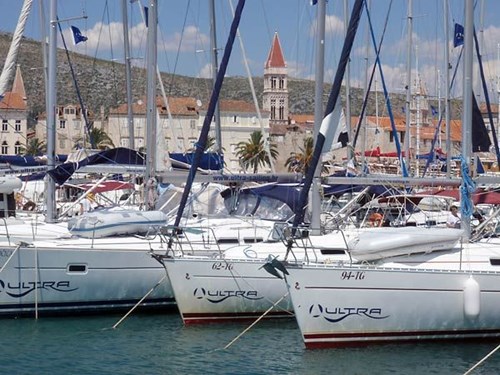 Trogir is a town with a port on the coast of Kaštela Bay 27 km westwards from Split. Its old city nucleus is situated on a small islet between Čiovo and the land. The airport Split is nearby. ACI marina Trogir has 200 sea berths and 80 berths on land. Trogir is overflown with preserved historical monuments. Lovers of cultural monuments, works of art, original buildings and beautiful streets shall learn here about its magnificent and multi-layered heritage. 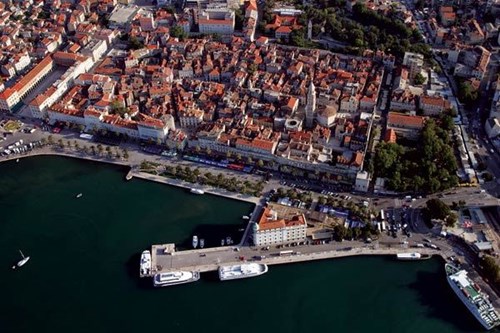 Split (Aspalatos, Spalatum, Spljet. Split... as its name changed from the days of Ancient Greece until today), is the second largest city in Croatia and the heart of the Dalmatia region. The old town is built around a sheltered harbour, on the south side of a high peninsula sheltered from the open sea by many islands. Ferries to these islands are constantly coming and going. The entire west end of the peninsula is a vast wooded mountain park, while industry, shipyards, limestone quarries and the ugly commercial/military port are mercifully far away on the north side of the peninsula. High coastal mountains set against the blue Adriatic provide a striking frame to the scene. 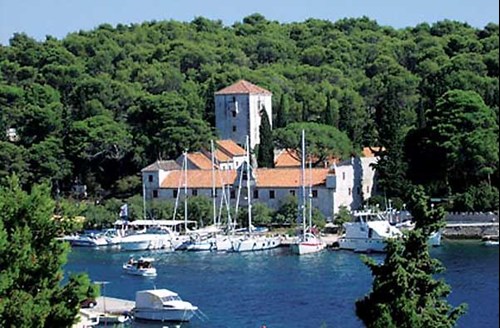 Maslinica is the only place on island of Šolta which is situated in the bay on the western side of the island. It reminds us of main attractions of this area, which is picturesque bay and pine trees on the south side, and nearby deep and sheltered bay Šešula and archipelago consisting of 7 islands. Maslinica came into being in 1703 where aristocratic family Marchi asked Venetian representative for permission to form settlement and to build castle fortified with towers so it can defend itself from frequent pirate’s attacks. Castle has been turned into well known restaurant Conte Albert. Today Maslinica draws attentions for those seeking peace during the day and night. Ferry do not stop here so to reach Split one has to travel from Rogač. Beside safe anchor point is bay of Šešula, Maslinica offers 25 berths with water and electricity supply. 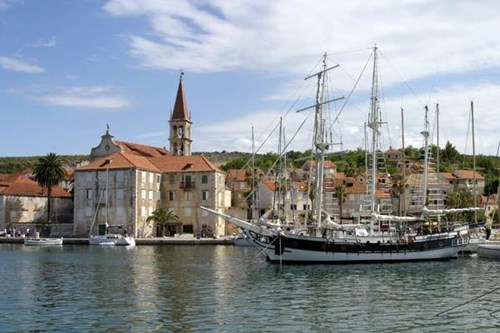 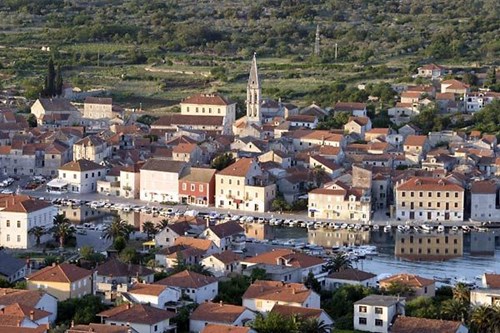 Stari Grad is the Historic centre of island Hvar, ancient settlement Faros is built at the spot where deep bay meets the island coastline full of grapevine and olive fields. Surrounded by the pine trees, cooled by summery breeze (maestral) Starigrad during hot summer days is one of the rare Dalmatian places where the air is cool. Not to be missed in Hektorović Palace, renaissance building with fish pond and pergola and it is the best place to show the towns’ history. Starigrad Marina offers 40 berths with water and electricity supply and 40 buoys. 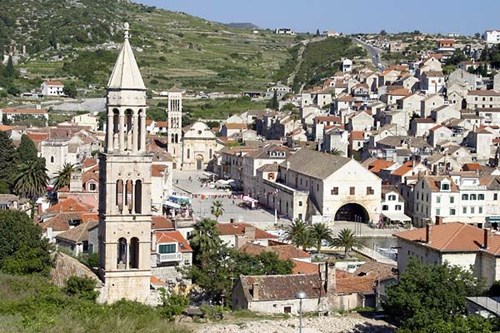 Hvar is a town with a port on the southwestern coast of the island with the homonymous name; it lies in a small bay protected by Pakleni otoci southwards and in the north it is protected by a low ridge. The pronouncedly Mediterranean climate is here without any greater oscilations; there are 2715 sunny hours in the year. This is a town with an exceptional cultural and historical heritage and simultaneously a tourist centre with a centennial tourist tradition. Pleasant climate, plenty of sunny days, natural attractions, varied hotel, catering, sport and recreational offer attract tourists during the whole year. 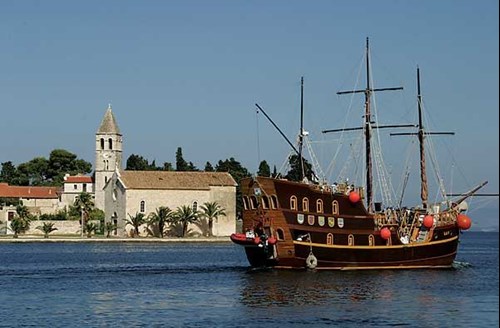 The best features of island of Vis are beautiful, blue, crystal-clear sea, pebble and sand beaches. The beaches are an oasis of peace and are perhaps the most treasured part of Vis. There are many restaurants in Vis, from luxurious to traditional taverns in the centre of Vis and Komiža but as well as plenty are situated in many beautiful bays and what they all have in common is that they offer local specialties in relaxing environment. If you wish to explore inland, only 10 km away you will find village settlements offering village tourism with good quality accommodation and traditional dishes and you will encounter remarkable hospitality.

Komiža is a locality with a port on the foothills of the hill Hum (587 m) on the west coast of the island of Vis. It is situated in a deep bay with eastern side full of gravel beaches (Gusarica, Nova pošta, Velo žalo). Komiža is famous for its top quality accommodation - there is a hotel with numerous apartments. The island’s famous historical and cultural component includes monastery, fortress and the fishermen from Komiža are well-known (they are famous in San Pedro, California, too), so fish and the fruits of the sea have become traditional food on this island. Wines from Komiža are also known and highly esteemed. However, St. John’s bread is a special pastry of the island of Vis. 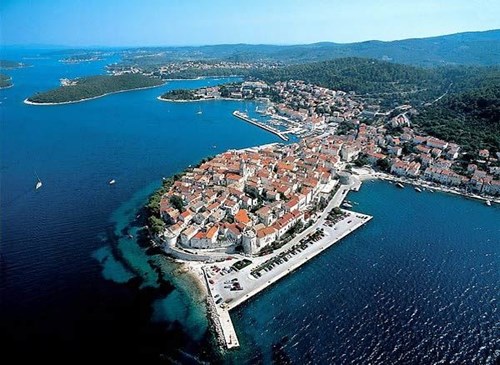 Korčula is a town with a port on the northeasten coast of the island with the same name situated on a peninsula connected with a narrow isthmus. Marina Korčula is situated in the small bay on the eastern side of the town. Korčula is a historical centre of the island being remarkable for its exceptionally beautiful geographical position in the Pelješac Channel, for the richness of its monumental and cultural heritage, shipping trade, shipbuilding, stone-carving, etc. Korčula is a birthplace of the famous sailor Marko Polo. 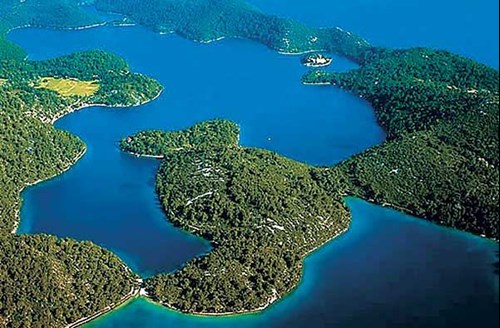 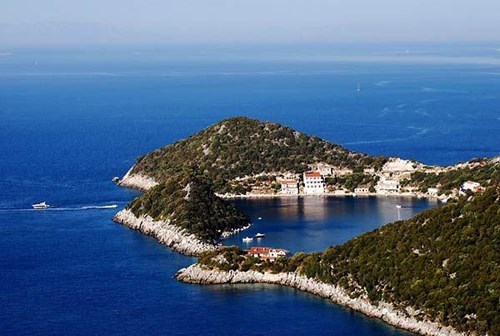 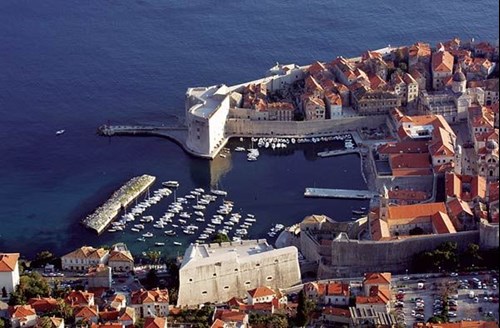 Dubrovnik is a town with a unique political and cultural history, with a worldwide famous monumental heritage and an extraordinary beauty (included in the UNESCO register of the World Cultural Heritage). It is one of the most attractive and the worldwide best known cities of the Mediterranean. Marina Dubrovnik is situated in the locality of Komolac in the inner part of Rijeka dubrovačka, approximately 4 km from the entry to the port of Gruž.